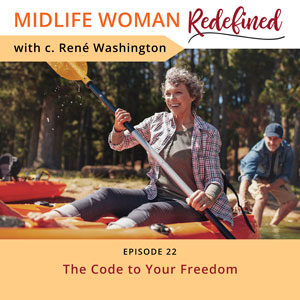 Over the Thanksgiving holiday this year I got a few reminders about what’s really important in our lives. So many midlife women feel trapped in this stage of life, held down by a bunch of crap that is no longer serving them. But there is another way.

Ladies, as we move into a new decade, it is time to decide what the code to your freedom is. We all have testing circumstances, but it’s how you get yourself out of them that matters in the end.

Join me on the podcast this week as I share a story from my Thanksgiving that made me realize the importance of knowing the code that sets you free. I’m also sharing why it’s important to let go of the shit that is weighing you down, so you don’t have to carry it into 2020.

It’s December and there is no gift I would like better than for you to rate, review, subscribe, and share this podcast with your friends, family, and anybody who would benefit from what I’m sharing.

Listen to the Full Episode:

Featured on the Show:

“Know the code that sets you free,” C. René Washington.

Welcome to Midlife Woman Redefined, a podcast for women near retirement who are ready to step into a new chapter of freedom, travel, and fulfillment. If you’re ready to focus on figuring out who you are and what you really want, this is the place for you. Here’s your host, master certified life coach, travel addict, and midlife maven, René Washington.

Hello, mavens. Yes, I am C. René Washington, your life coach and your midlife maven. And we are here for another episode of Midlife Woman Redefined. And we are talking about fear, false evidence appearing real. This is what we’re going to be talking about for the next several months as we go into the new decade.

And today, we are talking about the code. Do you know your freedom code? But before we get into that, we celebrate. Take a moment to pause and acknowledge something that you’ve achieved or accomplished.

I’m celebrating two things; one, that I just completed the fourth appearance on the local general interest show Talk of Alabama. Very excited about that. Talking about being afraid, it took me two or three years to pitch them to be on the show, and now I’ve been on four times.

Okay, so let’s get into this code business. And this stems from my Thanksgiving holiday weekend. I live in Birmingham, Alabama and my aunt, who also happens to be my godmother, lives outside of Chicago.

When I get there, my aunt is – she turned 85 a few days after the holiday weekend. So she’s been there probably 25 years alone since my uncle died and she’s pretty set in her ways, a lot of control issues. I come from a long line of controlling women. I love her dearly and also, she drives me nuts, for many reasons. But I digress.

She left me in the house alone because she wanted to go to her church to set up something, so I said fine. I was upstairs when she left and got hungry. It was morning. I was going down to get breakfast, stepped into the kitchen, and the alarm went off. And I freak out.

I had forgotten the code because she is so controlling, she won’t let anybody else drive her car, she claims her insurance won’t allow anyone else to drive her car, no matter how many times I tell her that can’t be true, she insists that it is. And because of that, I’m pretty much with her the whole time I’m there.

I don’t really venture off too often on my own because I don’t have a car, I don’t want to rent a car. The last time I did though was a few years ago, I was up there and I wanted to go into the city. I’m a city girl. It’s Chicago. She doesn’t like to go into the city.

So I sneak out of the house. I’m 50-something years old and I sneak out of her house. She had gone to church then and I met some girlfriends in the city by walking to the train station. It was about a 20-minute walk, get on this train, go into the city, meet my friends, they bring me back. I let her know where I am but she didn’t know I was going.

So I did know the code then, but at that moment when that alarm went off, it freaked me out so badly I couldn’t remember it. So I run back upstairs and I’m thinking in my head, oh my gosh, the police are going to come, I’m going to be shot. All of this stuff is going through my head.

The phone rings. I know it’s the alarm company. It is and she’s asking me, do I know the code? Of course, no, I don’t know the code. She said, “Well can you guess?” So I start guessing. I guess my uncle’s name, which was – Pat was his nickname.

So we go back and forth. And she was really nice and she could tell I was so nervous and so freaked out. And I told her the name of the church that my aunt went to. I told her her phone numbers. She said, “Does she have her cell with her?” I said, “Probably, but I can guarantee you it’s not on.”

So I give her the cell number. She calls my aunt. She’s not answering. Not surprised because we’ve had this conversation many times. She’s one of these people that turns on her phone to use it and then immediately turns it off. Oh, it drives me crazy.

So nothing is working. So the woman on the phone, I think she can sense my desperation and fear and my nervousness and so she tells me, “Well I will put in a request to the tech people to turn it off. I can’t guarantee it, but we’ll see what they’ll do.”

Long story short, eventually the alarm did go off. My aunt returned home. We had a conversation about her leaving her cell phone on that went in one ear and out the other. But that experience did make me think about life in general and how we can feel trapped.

The only thing that frees you is knowing your code. And as I thought about that, my code is faith, love, and choice. Faith that god will honor my walking in my purpose, walking in purpose and on purpose by allowing me to contribute where I’m most impactful, and receive what’s most abundantly impactful in my life, that I get to choose to move, do, and be wherever, whatever, whenever, however. I get to choose.

One of my favorite quotes is from Valarie Jarrett, President Obama’s former chief of staff who made the statement when I went to see her at an appearance that, every morning, she gets to wake up and decide what she wants to do that day. That resonates with me so deeply.

So what’s your code, mavens? What is your code for living the life that you want to live?

I also got a reminder, from being at my aunt’s house, to continuously let shit go. Her house is full of stuff that she doesn’t begin to need, stuff that’s been in there for eons, little stuff, dusty animals, just all kinds of stuff everywhere you turn. And for me, letting stuff go translates into letting mind crap go.

I think better when I’m not immersing myself in clutter. I feel better when I’m not surrounded by a bunch of junk that I don’t need. So I came back home and I started purging again; kitchen cabinets, drawers, closets. Now, I live with a semi-hoarder, whose name is Robert Washington.

But I’m not focusing on him. That’s distraction. I’m staying in my business. Think about this. Our bodies were designed with several ways to eliminate excess; through tears, sweat, vomit, snot, urine, and you know the mantra. So many of us hold onto an excess of crap that no longer serves us and we need to stop that.

And there’s a practical reason for doing this. One, we will leave here. We will make our transition. Somebody will have to come in behind you and clear out all of that junk. I’ve already told my aunt that we’re coming up there in the spring to do that.

Save your partner, children, friends from having to do that for you. And while you are still here, you are blocking what’s waiting on you. Open up that space so that more goodness can come into your life, not junk, goodness.

I’m also attaching an article in the show notes about how even donating to second-hand shops isn’t as great of a plan as it used to be because things aren’t made as well as they used to be and so now even the second hand shops are saying, a lot of this stuff, they can’t even repurpose or use. And it ends up in the landfill. Think about it, people.

So that’s today’s episode. Know your codes and let some shit go. Free yourself. And remember, if I’ve said anything that resonates well with you, that has given you something to think about, something to change in your life, take a few minutes to rate and review the show. It’s December and I would love for you to gift me with a rating and a review and to subscribe to the show and share it with your friends. Could you do that for me?

Okay, I hope you’ve enjoyed the show. And as we always say, for mavens, living well is the only option.

Thanks for listening to this week’s episode of Midlife Woman Redefined. If you’re ready to learn more and reclaim your time, head over to crenecoach.com.

Get the good stuff(once, maybe twice a week)

New offerings, events, my latest blog, and tips too great not to share